WILLIAMS – TOO CLOSE TO CALL 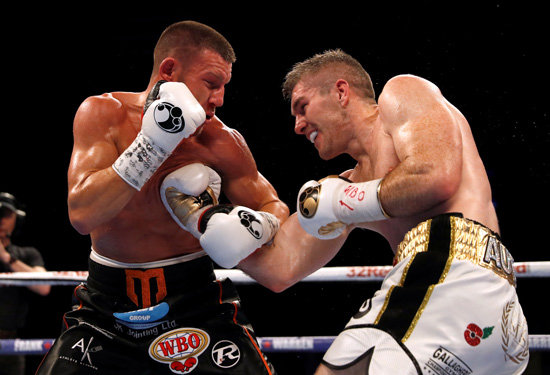 LIAM WILLIAMS BELIEVES his fellow super welterweight Liam Smith is in for a tough night against the Mexican banger Jaime Munguia in Las Vegas this weekend, but suspects his old adversary has got what it takes to repel the fire of the 21-year-old and take the fight to the wire.

Munguia stepped in to replace mandatory challenger Smith back in May when Sadam Ali – who defeated Miguel Cotto in his final fight – held the WBO world super welterweight title.

Munguia caused something of an upset by flooring Ali four times on his way to a fourth round stoppage and the former WBC Latino champion must now fulfil the mandatory obligation against Smith.

Munguia has only been taken the distance four times in his 29 fights so far, with three of those coming in his early four and six rounders.

So Smith, as Williams suggests, is up against a bit of a puncher.

“Yes he looks good and looks like he can punch a bit,” said the Welshman, who fought Smith twice in 2017, losing the first due to a severe cut and the second via a majority points decision.

“It is a difficult one to call really because Liam is so tough and durable and he is actually a lot more skilful than people give him credit for.

“People think he is very basic and just comes forward, but when you are actually in the ring with him he is a lot more effective than he looks from the outside.”

Williams, however, was at a bit of a loss when it came to actually picking a winner in a fight that will be screened live and exclusive on BT Sport 1 from 3am on Sunday morning from the Hard Rock Hotel and Casino.

“I don’t know, it is such a close one to call and I think it is one that will come down to the wire and go the distance. It could be a really gruelling fight and very close.”

He might have struggled to pick a winner, but the 26-year-old did not hedge his bets when asked if he would like a shot at the winner. Williams is preparing for an expected September return in new surrounding under recently appointed trainer Dominic Ingle in Sheffield.

“One hundred per cent I would fancy it with either of them,” he insisted. “Whoever wins, I can’t really see myself being in position to get the next shot, but I would certainly take it.

“I am back on a roll now, I feeling good and I am re-motivated, which a lot of people didn’t realise I needed because I never really said anything.

“Even for the second Smith fight I was lacking in motivation and didn’t really care enough. Don’t get me wrong, I wanted to win and I tried, but I didn’t have the motivation I should have had.

“What’s done is done and I am excited now by what is to come.”