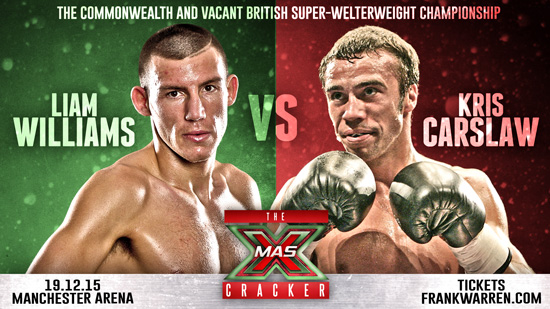 Clydach Vale puncher Williams, who’s unbeaten in 12 fights with seven knockouts, has his first fight in over year following surgery on his right hand after his first round stoppage of Michael Lomax in November last year to win the Commonwealth title.

Williams, 23, was in devastating form last year with stoppage wins over Yuri Pompilio, Ronnie Heffron, Stepan Horvath and Lomax, and is now raring to get back on his world title trail.

“I’ve been out of the ring for a while so I’m looking forward to making my return and getting my name back up there again,” Said Williams.

“I was on a good run of KO’s against Pompilio, Heffron, Horvath and Lomax so Carslaw will be a good fight back for me and bring the best out.  My right hand feels brand new now and I’m punching harder than before with equal confidence in sparring and hitting the bags so I’m not afraid to let it go on the night against Carslaw,”

“He’s a good all-rounder and decent at what he does, but to me he’s not spectacular in anything particular and I believe that my strength and punching power will be too much for him on the night,”

“Just like the rugby, a Wales v Scotland showdown in the boxing ring is bound to be an explosive clash and one that will bring out the best in us.  I’m confident that I’ll be coming away the winner and continue on my road to the world title.”

Carslaw, from Paisley, lost in his previous challenge for the British Super-Welterweight title against Brian Rose in June 2012, but says he’s waited long enough for his second shot and won’t put it to waste against Williams.

“I can’t wait to get to Williams and was over the moon when I heard the news I’d be fighting him for his Commonwealth belt and with the Vacant British title also on the line,” Said Carslaw.

“There’s no way I’m letting that British belt slip past me a second time after waiting over three years since the Rose fight, this time I’ll make sure the Lonsdale belt comes back home to Scotland with me.”

“Williams is a good, strong, fighter, he hits hard, but he’s one dimensional.  I’ll come up with the game plan to beat him,”

“It’s going to be a massive fight between me and Williams with plenty of national pride on the line, the best man is going to win on the night and that is me.”