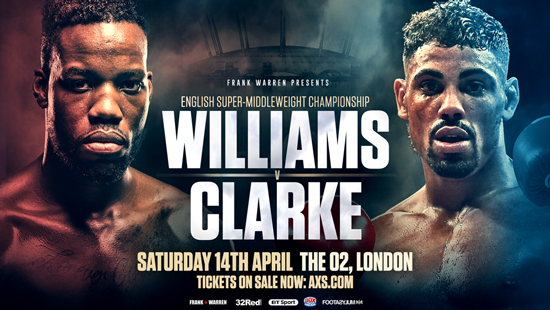 English Super-Middleweight Champion Darryll Williams will make the second defence of his title against undefeated Halesowen talent Lennox Clarke at The 02 on Saturday 14th April.

Williams (16-0, 6 KO’s) seized the English 168lbs title from Jahmaine Smyle in a Fight of the Year contender at the Leicester Arena in April 2017.

The all-out war went the South Londoner’s way on a split points decision after 10 tremendous rounds of gruelling, back-and-forth action that had fans on their feet throughout.

‘Ferocious’ then inflicted another defeat on his bitter foe when the rivals rematched at London’s Copper Box Arena. All-action Williams won a majority decision against Smyle as the pair served up another belter of a contest.

Now trained by David John in Swansea, Williams is aiming to dispatch Clarke in style on April 14th before targeting a shot at the British Super-Middleweight title later in the year.

Fast-rising Midlands standout Clarke (16-0-1, 6 KO’s) has been waiting patiently for his shot at Williams’ title. The 26-year-old also holds a win over Smyle, having floored the Leicester man on the way to a ten round decision in December.

“I’m chomping at the bit to get back in the ring,” said Williams. “I’m quite surprised at how quickly I’ve been able to get back to full fitness and get my mind back in the game. I’ve been training harder than ever and I’m ready to go again.

“Ive watched Clarke’s win over Smyle and all I took from it is that he beat an already defeated man. By the time Clarke fought Smyle, he was already a well defeated fighter mentally. He had two all-out wars with me and some tough fights before that.

“Up until he scored a knockdown in round nine I actually had Clarke losing the fight. Smyle was pressuring Clarke and pushing him back, if he can’t handle Smyle then what am I going to do to him?

“This is a fight that I have wanted for a long time,” said Clarke. “Darryll is a very dangerous opponent and it’s going to be a tough fight but I’m very confident of getting the win. We’ve both boxed Jahmaine Smyle in our last fights and I beat him comfortably while Darryll went life and death with him twice.”