At last, Anthony Joshua’s promoters have started talking some sense. He is a long way off a world title shot – he knows it and now so do they. 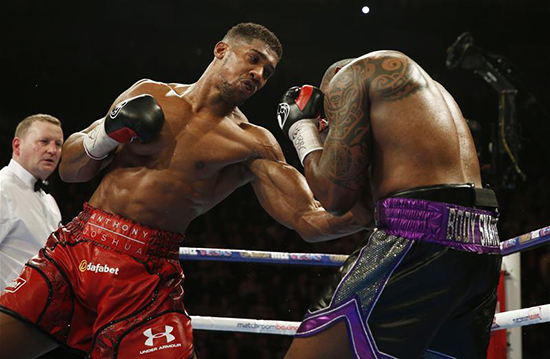 The way he finally finished off Dillian Whyte was pretty spectacular but the problem now is how do you make more pay-per-view fights for him? As he admits himself he still has the L plates on and is far from the finished article.

This was a good fight, better than many had anticipated, and Whyte did better than anyone expected, including me, but I still contend it was not PPV material. From Josh’s point of view, it raised a lot more questions than answers.

I’ve always been an admirer and maintained he is a great prospect, potentially a future world champion, but there are worrying deficiencies that need to be sorted out.

Remember, he was fighting a novice, albeit one who actually came to fight, unlike the majority of his previous opponents. We know now that he can get caught and he did wobble.

The way he got clipped in the second round and his reaction to it was reminiscent of Frank Bruno against Jumbo Cummings, but the difference is that Cummings was a much better fighter than Whyte and Bruno went on to win the world title in a much heavyweight era.

I was a bit surprised at Josh’s defence, or rather lack of it. I thought it would be better than that and obviously there is work to be done before he can be seriously considered as a world title contender.

Apparently there was some talk at ringside of him beating Tyson Fury if they met now – that’s rubbish. Fury would know too much for him and so might David Haye.

The one thing about Haye is that if he hits you on the chin, you’ll go. The rumours persist that Joshua was knocked out in sparring by David Price and was unconscious for five minutes. Of course, although he has been shown to be immensely vulnerable, Price can bang and can knock anyone out if he catches them.

Look, I hope I’m not being too harsh, because anyone can get wobbled – Joe Calzaghe will tell you about that – but it is about working on that defence, and that has to be a priority.

In that respect, despite all the eulogies that have been written about his performance and it was an exciting fight, I was a bit disappointed.

At the end of the day, Josh’s class was clearly the deciding factor, but it is up to him and his team to start answering the questions that were presented.

I always thought Chris Eubank Jnr would have the beating of Spike O’Sullivan. As usual, he boxed well but he lacks a finishing big punch, and like Josh he can be hit.

Despite what his old man says, I can’t see him coping with the likes of Golovkin or Jacobs. Let’s put it this way, he’s a decent boxer, but he’s not difficult to find with a punch, and both of them are devastating bangers.

It was a shame to see Britain’s other Olympic champion from 2012, Luke Campbell, floored and then suffering his first pro career loss. He’s a lovely lad but, to be honest, he doesn’t do it for me. He always seems somewhat fragile. I’m not sure it was a wise decision to put him in with that very capable Frenchman Yvan Mendy at this stage if his career and you have to wonder if it really is a good idea for Anthony Crolla now to fight the similarly tasty guy who beat Kevin Mitchell.

Why doesn’t he take one that would mean something to the British public, against the winner of Terry Flanagan and Derry Mathews? He might have a better chance because he’s certainly going to have his hands full with Ismael Barosso, yet another teak-tough Venezuelan, who brutally blitzed Kevin Mitchell.

I’m afraid it looks as his earlier wayward lifestyle finally caught up with Mitchell, and has now overtaken him.

I can’t see where he goes from here. Again, I have to ask why didn’t he take the fight we offered with Flanagan? At least he would have gone out fighting for a world title and more money.