But the 26 year old landscape and portrait artist insists that it’s his mesmerising skills that will see him land the vacant WBO title when he swaps leather with Liverpool’s Liam Smith at Manchester Arena. 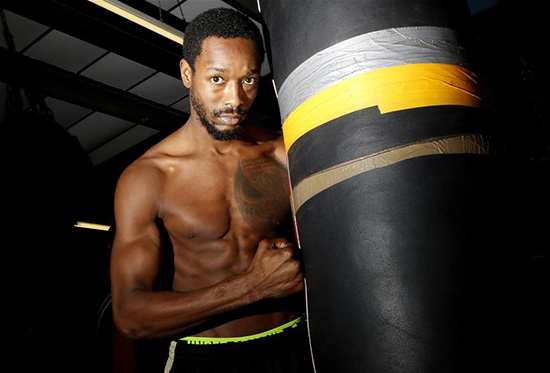 ‘That knockout just happened naturally. I do have strength but I certainly don’t rely on it. First and foremost, I’m a pure boxer; smart, intelligent, adaptable,’ stresses the self-managed 6ft 1in stylist who has lost just once in 18 paid starts.

‘Victory will be the start of John Thompson dominating the junior-middleweight division, picking up all the belts that Floyd Mayweather left behind. I intend to be considered number one at 154, the best I can possibly be.’

Though a well rounded and articulate individual, the former United Airlines employee has been scrapping for as long as he can remember.

He explains: ‘I grew up in Newark, New Jersey which was a pretty rough town with a lot of street gangs and stuff but it was also a pretty cool place. There’s a lot of very talented people who come out of there.

‘My father John Wesley Thompson III had been a fighter and he started me out at the boxing gym when I was just four years old. Under my father’s tutelage, I had the first of my 111 amateur fights aged six and went on to win several Silver and Golden Gloves titles plus the prestigious Ohio Fair tournament. In 2009 I boxed on the US national team. All told, I won 89 amateur fights beating the likes of (current WBA welterweight king) Keith Thurman and Glen Tapia.’

‘I’m not a child but I’m still youthful at heart. The Apollo comes from the Greek god of music, son of Zeus and Leto, a very talented individual, as am I. The (nick)name also honours the 1969 US spaceship that landed on the moon. ‘One small step for man, one giant leap for mankind!’ That’s me. I don’t just box for my own glory, I hope to open doors for everybody else. I view myself as a motivator, innovator.’

And it is not only inside the prize ring that this creative individual tries to put things down on canvas. Though the Denis Porter coached fighter abdicated from his position with UA in the summer of 2014 to allow greater focus on his boxing ambitions, he continues to moonlight as a  painter and his company Divine Artist has provided art work for the likes of Andre Ward and Miley Cyrus.

‘I started drawing in the third grade, then later attended the Cicely Tyson School of Performing Arts in New Jersey where I found my own structure, developed my own route,’ he says.

After ditching his singlet and head guard in June 2011, the slick and crafty stylist motored to 14 wins (five quick) whilst apprenticing in the fight clubs of America’s east coast. However, in a January 2014 crossroads clash with Brooklyn’s unbeaten Frank Galarza, he was rubbed out inside two rounds.

‘The first round went greatly for me but I came out unprepared for the second and got caught by a good punch. In top class that’s all it takes,’ reflects Thompson who was then dormant from the ring for 13 months.

‘But the year lay-off was nothing to do with me thinking about quitting. I simply got injured in a ‘hit and run’ when a jeep smashed into my motor cycle.’

He finally resurfaced this February as an unfancied late notice entrant for the ESPN network’s Boxcino tournament where a brace of point wins moved him into the final against Adams. He rose from a first round knockdown to take care of business in dramatic fashion.

‘Boxcino provided a perfect opportunity for me to redeem myself,’ says Thompson whose last seven opponents have lost just five times in 88 starts combined.

‘Prior to the Galarza loss and lay-off the contenders were scared to chance themselves against me. But because of the way I lost, I guess they assumed I didn’t have a chin. Did everybody think I wasn’t working to correct my mistakes in the interim?!’

‘The knockdown against me was nothing. The referee administered an eight count when I tripped on the rope. He later apologised to me for his mistake.’

While Saturday’s spat with ‘Beefy’ Smith represents his first pro start outside the USA, Thompson is no stranger to the UK and will land in Manchester with his own small pocket of support. 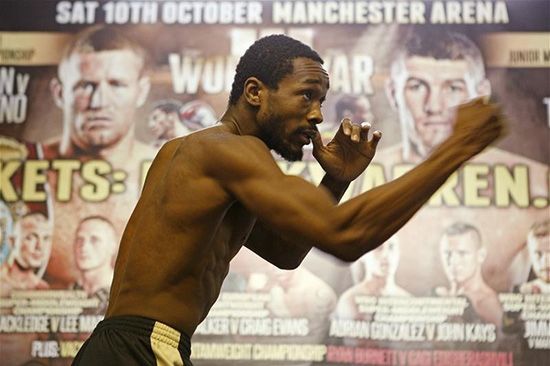 He explains: ‘My best friend married a lady in Scotland but he passed three years ago. I’m godfather to their child. I’ve visited them 11 times and they’ve adopted me as part of their family. They’re all coming to the fight to support me and I expect to perform.

‘I saw the big response that Ricky Hatton got from the Manchester fans but I’m certainly not worried about fighting there. I view it as a positive opportunity for me to broaden my fan base, show the world what John Thompson IV is all about.’

Having scrutinised the unbeaten Smith, ‘Apollo Kidd’ anticipates an almighty battle but nevertheless expects to return through customs with the WBO belt packed neatly into his luggage.

‘I’ve seen tapes of Liam box and I’ve heard him speak. He won’t underestimate me. He knows he’s in for a fight,’ he says.

‘He’s an okay boxer, a pretty basic, come forward type. On Saturday, I expect to see the fittest, best Liam Smith against the fittest, best John Thompson. But I’m certainly not losing any sleep over this guy!’

The Channel Of Champions, BoxNation, will televise live and exclusive on Sky 437/HD 490, Virgin 546 and Talk Talk 415. Subscribe at www.boxnation.com or watch online at Livesport.tv or via iPhone, iPad or Android.