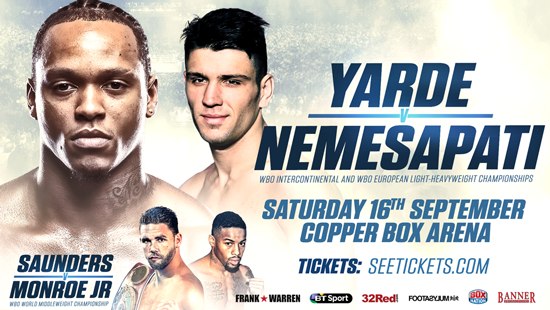 Undefeated Yarde (12-0, 11 KO’s) claimed the Southern Area title by defeating Chris Hobbs in May and added the WBO European title in July with a first-round demolition of Hungarian champion Richard Baranyi, which earned him a number eight spot in the World rankings.

The Iford man will not be taking his Hungarian opponent lightly. Nemesapati has only been stopped three times in 31 bouts and only to world class fighters. More experienced than Yarde, the 22-year-old Nemesapati has amassed 25 career wins since joining the professional ranks in 2012, stopping 18 of his opponents.

“I can’t wait to get back under the lights and add another belt to my collection on September 16th,” said Yarde. “It is a late change of opponent but I have stayed focused in the gym and will deliver another explosive performance at the Copper Box.

“I still haven’t shown anywhere near my full potential, I’m looking forward to stepping it up now. I feel good, I feel healthy and I feel fit. A win next week takes me a step closer to becoming the World Champion, that’s my goal.”

Frank Warren said: “The original opponent Ryan Ford had signed a contract to face Anthony Yarde some weeks ago but he has now gone missing, he hasn’t responded to emails or calls and his manager has become invisible too. We are disappointed as he was another undefeated opponent for Anthony. Like the true professional he is, Anthony has stayed focus throughout and is determined to win another belt.

“Nemesapti has been in with some excellent opponents throughout his career and will be coming over here to win. I’m expecting a competitive contest between two young fighters.”