ANTHONY YARDE insists that boxing will always be his first priority after signing a global deal with Adidas.

The unbeaten Ilford knockout artist has become a Global Brand Ambassador for the sportswear giants, but knows ring business must come first.

Yarde (16-0) hopes to mark the landmark deal with his 16th KO in 17 fights when he defends his WBO Inter-Continental Light-Heavyweight crown against Argentinian Walter Gabriel Sequeira (21-4) at the Brentwood Centre on Saturday October 20th.

“The Adidas deal is a good thing, but I have got my excitement for it out of the way even though it has just been announced.

“My only focus is winning on October 20th and delivering a spectacular performance – maybe an early knockout.

“I’ve just got to keep doing my job in the ring and everything else will fall into place. When you believe in something and work towards it anything can be achieved.”

He said: “The last boxer to get an Adidas deal on this type of level was Prince Naseem Hamed and his arrangement wasn’t global.

“It shows the attention that Anthony is getting from boxing and mainstream sports fans.

“Adidas recognise his potential and the star quality he holds at this embryonic stage of his career.”

Yarde, 27, added: “It is a massive achievement and just the next step towards where I’m going in life. It can sky rocket what Tunde and myself are doing.

“The deal that we’ve done is me representing Adidas on a global scale so that makes it so much bigger.” 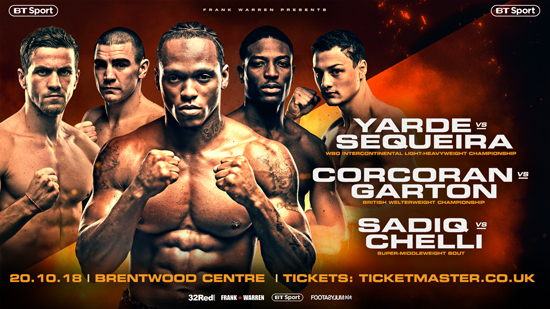