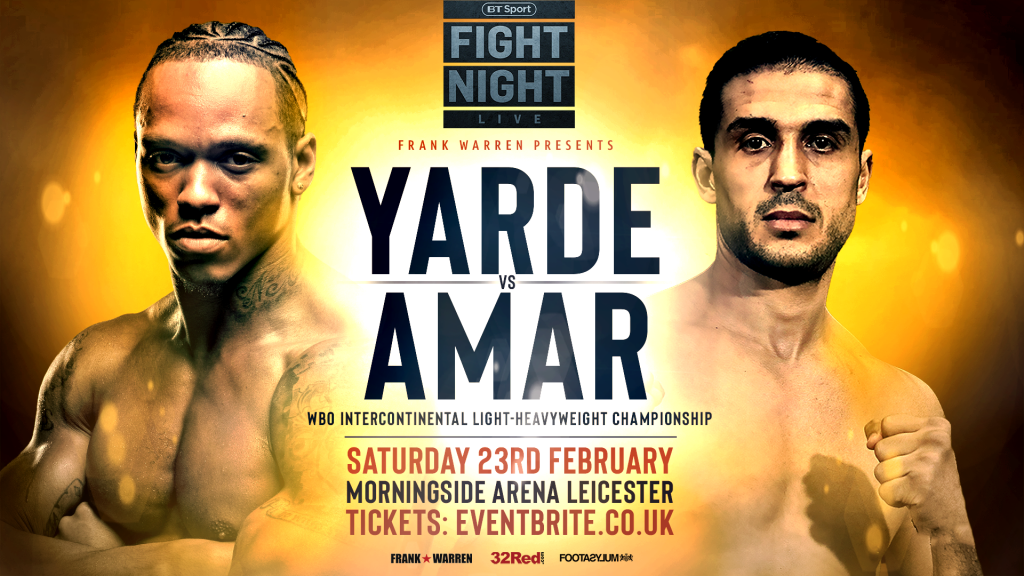 ANTHONY YARDE WILL face his toughest assignment to date when he takes on former European champion Mehdi Amar at the Morningside Arena in Leicester on February 23, live on BT Sport.
The 35-6-2 Frenchman, who hails from Marseille, has previously won the EBU light heavyweight belt, defeating Serhiy Demchenko before surrendering the title on German soil on points to former world super middleweight champion Robert Stieglitz.

Amar, who has been stopped only once in 2012, moved on to challenge for the WBC Interim world light heavyweight title against the formidable Ukrainian Oleksandr Gvozdyk – recent conqueror of Adonis Stevenson with a perfect 16-0 record – in March of 2018 at Madison Square Garden.

Amar was defeated over the 12 round distance but proved his credentials in operating at the highest level in an ultra-competitive weight division.

The 36-year-old, who made his debut in late 2007, is a vastly experienced campaigner with 267 rounds under his belt across his 43 professional fights.

Yarde, by comparison, has clocked up just 46 rounds in his 17 fights so far, winning the Southern Area, WBO European and WBO Intercontinental titles along the way, preparing for future fights that will rubber stamp his star quality.

The 27-year-old’s bludgeoning power and blistering speed has seen to it that only one – in his second fight as a pro – of his opponents has heard the final bell, resulting in him being ranked No.1 contender in the WBO rankings.

“I am aiming for big things this year and it starts here,” stated Yarde. “Amar possesses all the experience and know-how of operating at a high level, winning European titles and fighting some of the best in the division.

“He proved his durability and toughness by going the full 12 rounds with Gvozdyk and the only other two people to do that did it in six round fights.

“It is the perfect test for me at this stage of my own development and I am looking forward to making a big statement in Leicester.”