YORK HALL COOKED UP A STORM 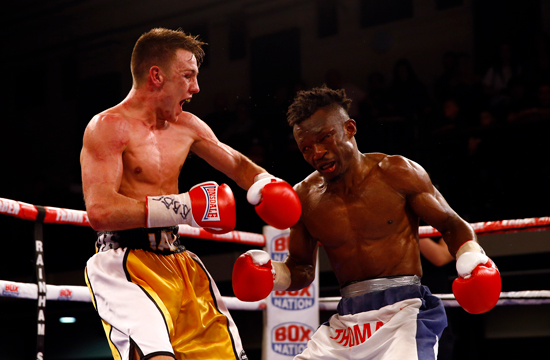 The night after Storm Doris hit Britain there were more than a few young fighters cooking up a whirlwind storm of their own on our show at York Hall on Friday.

These productions are not about glitz, glamour or hate-filled hype, these nights of old school boxing are about putting on a show for the fans.

Our young prospects certainly delivered and it was particularly pleasing to read so many kind comments on social media praising the entertainment value and quality of the fights.

The support is really appreciated and putting on fights that send the punters home happy is what we are in the business for. The fans at York Hall know that a big portion of the show is about development of young fighters, while the top end of the card aims to deliver fiercely competitive, evenly matched bouts.

The Commonwealth title scrap between Thomas Essomba and Jay Harris was a cracking contest that could’ve gone either way until Jay established his authority and pulled away from the former Cameroon Olympian to win by unanimous decision.

Essomba showed great heart and incredible resilience to not let the Swansea starlet have it all his own way. I hope he gets his rewards and is offered further opportunities down the line, but I am not sure too many young flyweight prospects will be queuing up to face him just yet.

Jay, who had not previously been extended beyond four rounds, proved that he has got the championship distance in his tank and boxed very smartly to combat a dangerous opponent who he was unlikely to force a stoppage against.

The 26-year-old now has a first belt for his professional collection and, with his dad Peter and the excellent Gary Lockett in his corner, I anticipate him really pushing on and making a mark in the division.

It was a really bruising encounter – and Jay’s hand didn’t look too clever afterwards – so I would imagine a little break is in order now before we start mapping out his next moves.

Boy Jones jnr will be naturally upset over surrendering his unbeaten record and his Southern Area title to Craig Poxton. But, at just turned 20-years-old, he should just put it down to experience.

It was a really good fight where a strong opponent came in and basically old-manned him. Maybe it was a step up too soon for Ben, but this is what you are up against when you are the holder of a title belt.

Too much is made of losing unbeaten records these days and all Ben needs to do is dust himself down and get ready to go again. He won’t have to wait too long to put himself back on course as he is on the card at our big Copper Box show on May 6.

The other boys on the bill all showed what they are about and it is difficult to pick a standout performer because I think they all did really well.

Charlie Driscoll is obviously really easy on the eye with his nifty footwork and punch picking, while Archie Sharp made a statement with his first stoppage since his debut in the summer of 2015.

These boys do have to be patient in looking to force knockouts because the opponents drafted in for their early learning fights are not in the habit of falling over too easily.

Patience is clearly a virtue possessed by Lerrone Richards, who seemed determined to get the rounds in when his corner felt he could have stepped on the gas.

Fair enough, Lerrone is coming back from enforced inactivity and probably felt the rounds would do him good. His stablemate at the iBox Gym, Danny Carr, also showed composure in winning over six rounds as quick stoppages are normally his forte.

I would also like to congratulate the trio of debutantes who all got their pro careers off to a winning start. Naylor Ball, Zak Chelli and Harley Benn all gave us a sign of things to come with impressive early finishes.

The last time Amir Khan was having the heat turned on him to sign up and finally face Kell Brook he pulled a rabbit out of the hat with the shock announcement that he was to face the formidable Canelo Alvarez.

If what we are being told is true, it looks like he has a similar trick up his sleeve this time around.

I would be genuinely delighted for Amir if his proposed match-up with Manny Pacquiao comes off because it is a fight he has been craving for many years now. I really hope they find the money to do it.

I do, however, suspect there will be a few more twists and turns in this story to come and the funding of the fight would appear to be the stumbling block.

The numbers being talked about are huge, but it is a fight Amir deserves so I hope the backers are in place.