YOU AIN’T SEEN NOTHING YET!

THE BIG INTERVIEW – JOSH WARRINGTON
Round 2 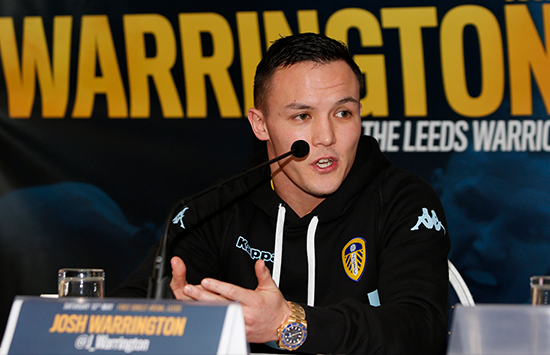 Josh Warrington has been an admiring ringside observer as the ‘New Era’ for boxing has unfolded with shows so far at Manchester and Leicester.

Josh, one of the principal flag bearers for the recent union between BoxNation and BT Sport, has been impressed with what he has witnessed up to now and can’t wait to gatecrash the party when the boxing roadshow rocks up in his home city of Leeds on May 13.

Marked absent from the ring since last July, the featherweight admits he was suffering from itchy fists on his watching brief.

“Yes I think you always do,” said the 26-year-old on being an impatient onlooker. “When you walk into the arenas and see the bright lights and the crowds cheering on the fighters. Being sat up close to it as well, seeing the punches going in and thinking ‘this is me in a couple of weeks’.

“It definitely gets the heart racing and you imagine yourself being in there and what you’d be doing, how you’d react to what they are going through. It gets you excited for it.”

Warrington has been on watch for the epic struggle between Liam Smith and Liam Williams at the Manchester Arena, the venue that also staged the fifth defence of Terry Flanagan’s world lightweight title and the debuts of Nicola Adams and Daniel Dubois.

He then ventured to the East Midlands to take in Tommy Langford’s unsuccessful tilt at the WBO Interim world title, a card that also featured the ‘Fight of the Year’ candidate between Darryll Williams and Jahmaine Smyle for the English title, as well as Lyon Woodstock claiming his first strap at Midlands Area level.

They were both eventful evenings where the fans preferred their seats to the nearby bars.

“They have been great, you can’t complain about the shows and both the cards have had quality fights on. I was well impressed with that last one, I think the whole card were very exciting right from the early fights to late on.”

However, despite his ringing endorsement for what has gone before, home is where the heart is and, as far as Josh is concerned, we ain’t seen nothing yet.

Such is the atmosphere Josh is anticipating for his ring return at the Leeds Arena, he has even warned the TV producers to expect the unexpected.

“I think so, don’t get me wrong though, the fights were good in the last couple of shows. The fights on the undercard of my one are very good as well but, speaking to a couple of guys from BT and BoxNation, I don’t think they have got any idea of what they are in for.

“You can see and hear it on telly, but being there is a different kettle of fish altogether. I don’t know what they are expecting, but I don’t think it will really get into their head until fight night. It is going to be a nice surprise for them.”

Josh has dropped a few hints in the past over the Leeds public being a little bit short-changed on promotions headlined by himself, where he had been something of a solo attraction.

It is not a claim he is likely to repeat this time around because he will be in very good company.

Jazza Dickens will be seeking to see off the emerging threat of the unbeaten Tommy Ward in a defence of his British super bantamweight title, with the also unbeaten starlet Josh Leather making a play for his first professional title by taking on Philip Sutcliffe Jnr for the IBF Intercontinental super lightweight title.

“Yeah definitely, in the past the stands have been quite quiet before even when we have had names on, then when we come on it just seems to flood out.

“There are some competitive fights on this time as well and I think the neutral boxing fans will want to see them fights. They are real fights, 50-50s, and they have sold tickets themselves and will be bringing some real support down. It will be a good mixture of support in that crowd.”

The vast majority of the crowd, of course, will be there to see Josh as he bids to work himself into world title contention. He has missed fighting at his home fortress and his loyal following have missed him too.

“It is good to be back and the local fanbase have had some withdrawal symptoms. It is a good night out and, for some fellas, they tell me it is the only time their missus lets them out! It is nice to have such support and it is becoming a bit of an event up in Leeds now – especially with Leeds United not making the Play-offs…

“It gives the lads something to look forward to.

“I suppose I am a bit of a consolation prize at the moment, although I don’t know if that is a good title for me! I’ll take it anyway.”

Josh, ever the super-salesman, reports that he has exceeded his personal best in ticket sales for his match-up with former world champion Kiko Martinez.

His previous best was an incredible 2,500 sold personally, which is testament to his tenacious sales technique, not to mention his popularity as person and a pugilist.

“Yeah we’re there and we’ve still got a bit of time to drive it up. There is always more at the last minute after pay day.

“Let’s put a good performance on, get some momentum going, then we can go on and start breaking more records.”

Next time: Josh on why Kiko Martinez will provide his passage to the elite