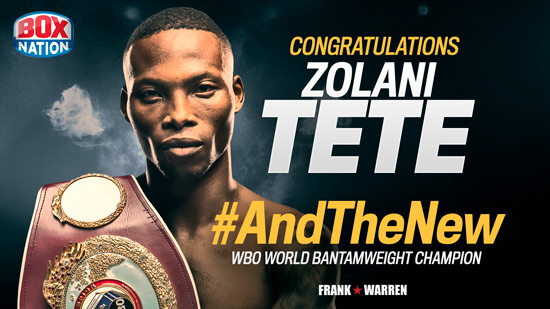 Tete oozed class over 12 rounds on his way to an emphatic points win over Filipino Arthur Villanueva on Saturday’s action-packed ‘City of Champions’ card at Leicester Arena, broadcast live on BoxNation.

After 12 rounds, and dropping Villanueva in the eleventh, Tete was declared the unanimous points winner with scores of 120-107 and 119-108 (twice).

The fight, originally scheduled to be an elimination bout to determine the mandatory challenger for the WBO Bantamweight Title, was elevated to an Interim Title status after Marlon Tapales was stripped of the Championship for missing weight prior to his defence against Shohei Omori in Japan.

In an interesting twist, WBO President Francisco ‘Paco’ Valcarcel, announced before the start of the bout that Tapales had been stripped of the title because he failed to make weight.

“I think I am dreaming‚” said Tete. “Please do not wake me up because this is an incredible dream.

“I left the UK as an Interim Champion. To become a full World Champion without getting into the ring is nothing short of a miracle. This shows that Nick Durandt’s spirit is with me.

“It has always been my dream to fight for another World Title. Now I have the WBO belt I want to clean up the rest of the divisions. I want to be remembered as one of the greatest African boxers of all time.”