Zolani Tete: “I’m quite happy to make my history in Liverpool”

South African jewel Zolani Tete insists he wants to be remembered as the greatest boxer ever produced by the Dark Continent….and he’s more than happy to conduct his future business affairs based out of the great fight city of Liverpool, writes Glynn Evans. 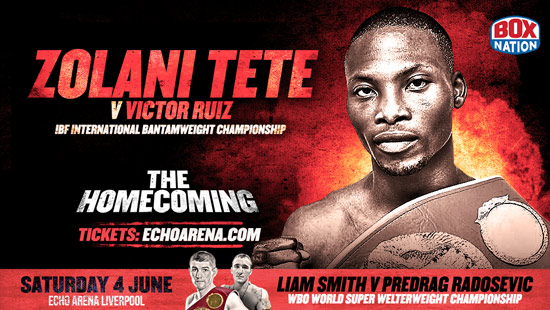 The spidery 5ft 9in southpaw is already a huge favourite on Merseyside after levelling home hero Paul Butler in the eighth round of a March 2015 defence of his IBF Super-Flyweight title. He then returned to the city’s Echo Arena 12 months later to net BoxNation’s Knockout of the Month gong by wiping out Guadalajara’s Jose Santos Gonzalez with a single right uppercut.

This Saturday, the 28 year old makes a third appearance in the Witty City when he defends the IBF International bantam title he won from Sanchez, against heavy handed Mexican southpaw Victor Ruiz.

And he’s promising yet another virtuoso performance for his ever expanding Scouse fan club.

‘The reception I receive is truly amazing. I can be everything that I want to be here in the UK. If Frank Warren brings the fights here, I’m quite happy to make my history in Liverpool.

‘I spent one week in the UK before the Paul Butler fight and one week again before my win over (Jose Santos) Gonzalez yet I was amazed how many guys recognised me on the street. Now I have many Facebook friends among the Liverpool fighters. They are all so friendly, invite me out to supper.

‘I don’t think I’ll ever get used to the cold! The Scousers all laugh because I’m always wearing a scarf and my beanie. But the Brits are very supportive. They appreciate their own champions but show big respect for others. Proper boxing fans. The positive way they talk about me is really motivating.’

Having previously wooed audiences in his homeland, Mexico (twice), Argentina and Japan, terrier Tete is evolving into a major world star and his profile is gradually starting to match his talent, following each sizzling UK performance.

‘To win BoxNation’s Knockout of the Month was a big honour.

‘Gonzalez had never been stopped before and the tapes we watched in preparation showed that he usually comes forward. But again, he didn’t want to fight with me once I touched him a few times. I expected more but my style didn’t give him opportunities.’

‘I’m awkward and deny you angles. I hit you but you don’t hit me. I gave him nothing.’

The man commissioned with delivering the opportunities that Tete’s ability so clearly merits is London promoter Frank Warren, who has previously operated profitably with other African stars like Azumah Nelson, Baby Jake Matlala, Sugar Boy Malinga and Harry Simon.

‘I knew Zolani was good but he’s even better than I initially thought. He’s very professional, very talented and can really wallop for his weight,’ assesses Hall of Fame inductee Warren who signed a multi-fight deal with the South African superstar late last year.

‘I consider Paul Butler to be an outstanding prospect but the way Zolani handled him has to be considered one of the most impressive performances from a visiting fighter to these shores for many years.

‘Personally, I think Tete’s a natural bantamweight but I doubt the champions will be queuing to give him a voluntary shot. It’s our job to give him the opportunities to do the trick. I intend to keep him busy, force a (mandatory) title shot then take it from there.

‘He can’t help but succeed. He’s a special, special talent.’